The Scottish DJ/producer pairs enigmatic Grammy Award-winning singer Frank Ocean and raps top group Migos. The single is Ocean’s first musical feature dropping his duel albums Endless and Blonde back in 2016. This track is sure to be at the top of the charts very soon.

“All my songs in 2017 have been sonically designed to make you feel fucking incredible,” tweeted the 33-year-old earlier this week. “More joyful music in 2017. I feel like it’s missing from the world. And it was missing from my life. So I created it !!!!.” 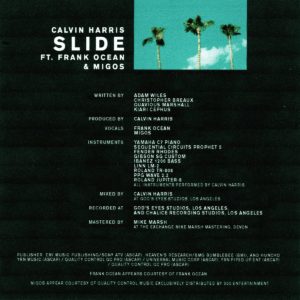 Listen to “Slide” below.