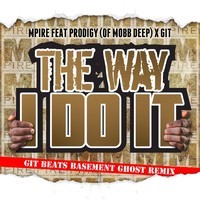 BBE/Yoruba Records producer Git aka Git Beats, and Mpire ft. Prodigy (Of Mobb Deep) return with a Git Beats Basement Ghost Remix. The track is off their upcoming joint Git x Mpire EP, which is set for early spring of 2014. Mpire is made up of three members Dax, Ark and Luminary, all born and raised in NYC (Brooklyn, LES). Mpire recently dropped visuals for the original version of “The way I do it” and a mixtape “Mpire Strikes Back” . Also be on the look out for Git x Hubbs “Piece Of Mind” LP Dropping January 2014.