Toronto natives just announced their 10 date North American tour, kicking off March 14 in San Francisco. Then the duo followed that news their new visual for the song “Learn From Each Other.”

Directed by Ben Strebel, lead singer Majid Al-Maskati finds himself mesmerized by a performer at a local pub. Watch below. 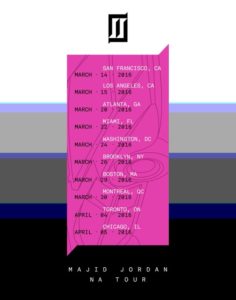