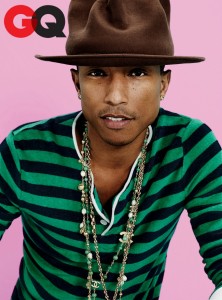 It Feels like Pharrell has been on a permanent victory lap since 2013, with his huge music success on the music billboards, his Oscar nom, getting married, owning the Grammys, and now the GQ cover boy has a new album out. He chats with the publication about his realizations that him trying to record music like Diddy and Jay Z, made his music lack purpose.

“I wrote those songs out of ego. Talking about the money I was making and the by-products of living that lifestyle. What was good about that? What’d you get out of it? There was no purpose. I was so under the wrong impression at that time.” “The money was too loud. The success was too much. The girls were too beautiful. The jewelry was too shiny. The cars were too fast. The houses were too big. It’s like not knowing how to swim and being thrown in the ocean for the ﬁrst time. Everything is just too crazy. You’re like, ﬂailing and kicking and whatever, and you know what happens, don’t you? You sink. My spirit sank. I just felt like, ‘F-ck, what am I doing?’ ” “That was just bragging. I wanted to be like Jay. I wanted to be like Puff. Those are their paths. I got my own path. But I didn’t know what my path was. I knew that I was meant to do something different. I knew that I needed to inject purpose in my music.”

Read the full story, titled “Pharrell Williams Is Finally Happy,” over at GQ. Pharrell’s new album, G I R L, is out March 3.