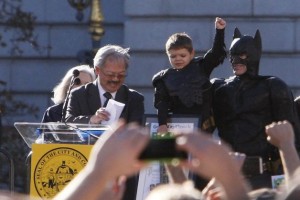 The city of San Francisco was turned into Gotham City on Friday, when the adorable BatKid saved the day. Thanks to the Make-A-Wish Foundation, 5 year old Miles was transformed into his favorite super hero and got the chance to be a hero for the day. Miles was diagnosed with Leukemia at just 18 months old, but has recently ended treatments in June. He is currently in remission and with his returning strength is more than capable to perform his super hero duties. Patricia Wilson, the executive director for the Make-A-Wish Greater Bay Area chapter, had been working on this project since March.

She planned a few crime-fighting adventures, estimated that she would need a few hundred people for the closing ceremony hosted by the mayor, and a few local vendors for food & supplies. Then the internet got a whiff of what was going on and the out pour of help and support were astounding. They received volunteer offers from all over the world, even as far as down under in Australia. The city was a site to see that day when the 10,000 volunteer took over the Bay Area, turning it into a scene worthy for a super hero. One would have thought that they were shooting some movie, hosting a premier, or some other cliche Hollywood event when they saw the masses that came to support. He even got support from other super heroes, Green Arrow(Stephen Amell from The CW’s Arrow), thanked BatKid for giving him and his team a night off through a special video on their Facebook fan page. And as if BatKid’s day couldn’t be any more memorable, President Obama was so impressed that he shared a Vine video applauding Miles for his efforts as Batkid. It’s such an amazing thing to be reminded that there are still beautiful moments like this in the world. 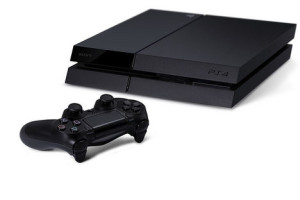 To all friends, family, and significant others of a gamer, I’m sure you must be wondering where they’ve disappeared off to and why are they taking so long to answer your text. Please do not file a missing persons report, although they will be missing for a while, and they are kinda cheating on you. But  if you got a hold of the new PS4, I’m sure you’d understand. Sony released the much anticipated PlayStation 4 this week and sent the gamers world wide into a frenzy. Sony was smart for not revealing a sneak peek of the PS4 console at their event earlier in February, because gamers were far from disappointed with their delayed gratification. Based on polls and reviews world wide, the PS4 was worth the wait. The new console is kinda like getting to relive your first time all over again. The console design takes it back to the classic form of gaming systems, while the touchpad adds a lovely upgrade and keeps it current. As much as we all can appreciate a little eye candy, it’s what’s inside that really matters. And you must be warned, the heart and soul of the PS4 is the Day One patch. Without it, there’s no broadcasting, remote play, blu-ray playback, PSN access, or online multiplayer mode. It’s like an overrated trophy wife, great to show off, but not much else going on. Besides that  the PS4 is the gift that keeps on giving. The visuals and interface was given a much needed improvement. And if you treat her right and get her gifts like Killzone: Shadow Fall, Resogun, Assassin’s Creed 4: Black Flag, and Battlefield 4, she’s sure to keep your hands and eye stimulated for quite some time. Seems that the Xbox One has quite a bit of competition for the holidays wish lists this season.
Icon Worthy??

Rumor has it that Navy Queen, Rih Rih will be receiving the American Music Awards first Icon Award. The Icon Award is supposed to “honor an artist whose body of work has made a profound influence over pop music on a global level.” And as far as we all know “Rihanna’s  iconic and innovative sound has enabled her to become one of the most influential and best-selling artists of all time,” announced producer Larry Klein. Although quite a few people were shocked and even upset at the news, it’s hard to argue with him on that point. She may not have the cleanest image to some people, but she has been one of the most influential and top earning pop musicians of our current generation. Most believe that she has not earned the honor of being called an Icon just yet. Some seem to be forgetting that it’s not what or how you are an influence, but rather how much of an influence that you are which is what the award focuses on. And whether you love her or hate her Rih Rih’s following is definitely on a global scale.
The Return of Dave Chappelle 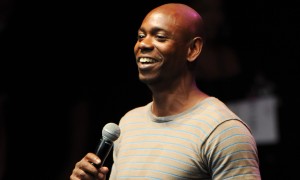 Could this be the return of Dave Chappelle? This week Chappelle made his first interview since August 2011. And many are wondering, does Chappelle still have it? Well by the looks of the numbers that have been coming out to his shows and supporters, I’d say that he does. There has not been another show like Chappelle Show, since the show ended and he turned down a $50 million dollar TV deal. After that, he disappeared for a few years, but has slowly been resurfacing for the past few months with a few shows around the country. The shows have gotten great reviews and was even raved about in the New York Times’ by Jason Zinoman. Also, Chappelle has been announced as the headliner for Funny or Die’s month long Oddball Comedy & Curiosity Festival tour and tickets are going fast. Looks like his fans couldn’t wait for his return, and what makes even better is that it came just in time for the Chappelle’s Show tenth anniversary coming up in January. Can’t wait to see what he has in store for us next year.
Kadian Watson Nov 18, 2013
previous article

“Eastbound & Down”: A Much Needed Breakdown of Episode 6