SZA’s debut album CTRL hits stores this Friday, and while on her press run she appeared on The Breakfast Club to talk about the project. 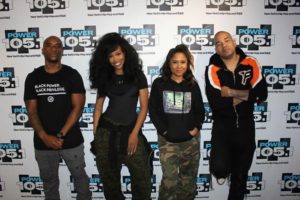 The first lady of TDE sat down to speak on the inspiration for her new album, her past relationships,  the subject of being the sidechick, working with Kendrick Lamar and Travi$ Scott on the album, her learning to love her size, her Twitter moment venting her frustration with TDE, working with and more.