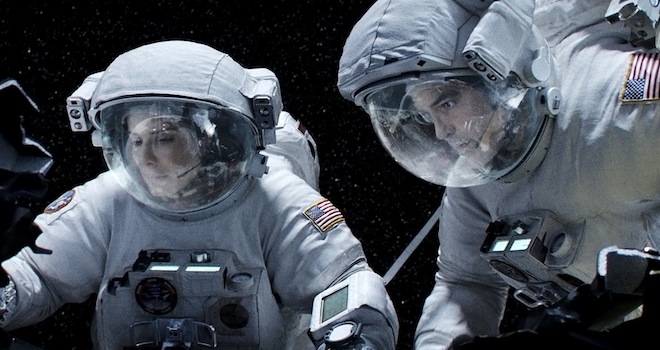 This weekend you have three options in wide release to go check out, but really, you have one must-see and two others that will be forgotten in a year. Gravity is the talk of the town and if you still haven’t heard of it, read on. It’s gonna be a good weekend.

Master filmmaker Alfonso Cuaron (Harry Potter and the Prisoner of Azkaban, Children of Men) returns with what many are saying is the best science fiction film in years. Co-written with his son Jonas, Gravity stars Sandra Bullock as medical engineer Dr. Ryan Stone and George Clooney as astronaut Matt Kowalski. When they go on a routine spacewalk, disaster unexpectedly strikes, leaving their shuttle destroyed and both stranded in deep space completely alone.

James Cameron has praised it as “the greatest space film ever”, drawing the attention of cinephiles who hold Kubrick’s “2001: A Space Odyssey” and Tarkovsky’s “Solaris” in that distinction. While drawing quite a few comparisons to 2001 (one look at the trailer brings a few to mind), Cuaron seems to be approaching the film in a way that immerses the viewer into deep space and uncertainty with Stone and Kowalski. Based on the glowing reviews the film has been receiving, and Cuaron’s track record as an innovator and filmmaker, this is a must see for anyone this weekend.

If there is any film to watch in 3D this year, this is it.

Brad Furman first garnered real attention from moviegoers with The Lincoln Lawyer; a film that re-energized Matthew McConaughey’s career and kept Furman on many studio go-to lists. His follow-up, Runner Runner, stars Justin Timberlake as Richie, a college student paying for tuition by gambling online. When he loses all of his money he travels to Costa Rica to confront Ivan (Affleck), the mastermind behind the online operation, to confront him about being swindled. Ivan takes a liking to Richie and brings him under his wing. As Richie gets more involved with Ivan and his operation, he realizes what he’s gotten himself into and tries to turn the tables on Ivan.

At first glance, this one seems to be pretty run-of-the-mill. Timberlake is a talented actor and Affleck is riding a wave of popularity in Hollywood, but based on the trailer this film doesn’t seem to present anything new. Affleck doesn’t look to have the range a character like Ivan seems to require and Timberlake doesn’t look to be in prime acting mode here. If you’re looking for something a bit less involved than Gravity, Runner Runner is your (far behind) runner-up this weekend.

METALLICA THROUGH THE NEVER

Director Nimrod Antal (Vacancy, Predators) tries something new by blending live concert footage with a parallel narrative in Metallica Through The Never. Dane DeHaan (Chronicle, The Place Beyond The Pines) stars in the narrative section as a roadie who goes on a mission during a raging live Metallica performance.

Seems to be an interesting experiment, and Antal impressed with the seediness and depravity of Vacancy, but do we really need another Metallica documentary? You be the judge.

Kendrick Lamar Takes A Shot at Drake in BET Cypher 2013

Get to Know: Mark U