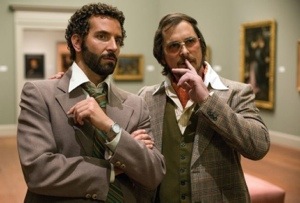 An adventure flick, a possible Oscar contender and a new Madea film. It’s the fall, so Oscar season is in full swing and a frontrunner is here: American Hustle. A contender for effects and makeup has arrived in the form of The Hobbit: The Desolation of Smaug, but that’s just scratching the surface of the intricacy of a production as large as that. Then there’s Tyler Perry’s A Madea Christmas. Surefire winner of the “avoid this at all costs” award. Oh well, two out of three isn’t so bad.

THE HOBBIT: THE DESOLATION OF SMAUG

Peter Jackson (The Lord of the Rings trilogy, King Kong) returns to Middle Earth for a fifth time in part two of three of The Hobbit trilogy. Now that’s a mouthful! Bilbo Baggins continues on his journey to help reclaim the lost Dwarf Kingdom of Erebor, encountering a dragon (the titular Smaug) that threatens to destroy him and his traveling companions. What was originally planned as two films has expanded into three, in large part due to studio greed. As a result, the Hobbit films so far feel bloated, marginalizing some important aspects of the book and expanding some not so important parts for the sake of set pieces (adapting a single book into three, 3+ hour films will force you to do that). Keep in mind that the LOTR trilogy was adapted from three separate books.

That being said, Jackson does an excellent job of keeping the viewer entertained. The first film, An Unexpected Journey, was a constant barrage of eye-popping set pieces and odd characters. While some complained about its running time and pace, I found it be constantly entertaining and fun as hell. It was one of the few films in recent memory where I was able to put my critical viewing approach aside and allowed myself to just go along for the ride. I expect a similar result with Smaug, and some early buzz indicates it’s even more exciting and cohesive than Journey. Count me in.

I kind of miss the David O. Russell (The Fighter, Silver Linings Playbook) of old, when his films reflected his unstable (but brilliant) state of mind. Three Kings and I Heart Huckabees still stand out on a resume that has recently gone a bit tame. Not bad, mind you, but tame in comparison to his early work. He has transitioned into making solid and occasionally memorable studio features, and that’s all fine and dandy. But I want, and expect, more.

Early buzz is overwhelmingly positive for the film that channels Scorsese, telling the story of a con man (Bale) and FBI agent (Cooper) who infiltrate the world of Jersey powerbrokers and the mob. The always excellent Amy Adams, Jeremy Renner, and Jennifer Lawrence round out the A-list cast. So why am I complaining, you ask? Because I have seen where Russell can go, and he hasn’t reached those peaks since the manic experimentation of Huckabees. I digress. American Hustle is a solid choice this and any other weekend of the year. You could do a lot worse.

I found out all I needed to know when I heard an advertisement on the radio for A Madea Christmas. I heard a cacophony of screeching voices and some very lame jokes. I knew I needed to avoid it at all costs. In the past, the Madea films have given me the impression they were escapist comedies that didn’t put an emphasis on pushing boundaries or going outside the same old formula seen again and again in studio films. The characters learn an important lesson by the end of the film and we all go home a little happier. BORING. A reviewer may have put it best why I plan to steer clear of this new one, though: “Sassy sister squares-off against backwoods hillbilly for lots of harmless holiday-themed laughs!”

Fuck no, thank you very much. That whole sentence made me cringe. Add the fact that there are some very ill-advised set pieces, including one with the Ku Klux Klan and another involving the crucifixion of a young girl, and that it wasn’t screened in advance for critics (never a good sign), this is definitely one to avoid this holiday season.

If you’re still not convinced, it has Larry The Cable Guy in it. Enough said.