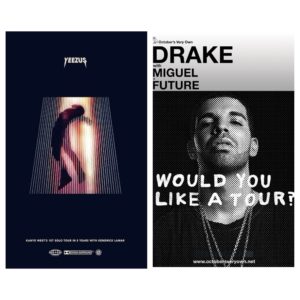 Looking to keep things interesting, it’s just been announced Kanye West is not only adding Kendrick Lamar to both Madison Square Garden and Barclay Center dates respectively, but legendary group A Tribe Called Quest has now been added to the bill. The tour is set to kick off October 19in Seattle, and will conclude December in Houston. While the Yeezus tour has good news, Drake’s Would You Like A Tour? has seen a significant change also.

It’s been reported that not only will Future no longer be joining Drake for tour dates, he’s also taking the Young Money rapper to court and suing for a reported 1.5 Million over lost wages. The problems reportedly stem from when Future spoke with Billboard about his coming album, but ending up downplaying Drake’s NWTS, saying:

“Drake made an album that is full of hits but it doesn’t grab you. They’re not possessive; they don’t make you feel the way I do. I want to make you want to fall in love.”

Though he later claimed on Twitter that he was misquoted, Drizzy apparently wasn’t having it and axed Future from the tour. Jhene Aiko will reportedly be taking his place. Do you think Drake should’ve been the bigger man and kept Future? After all money wise, they could’ve really raked in some serious dough. A look at Kanye’s added dates is below. Are you paying for A Tribe Called Quest? or Kendrick Lamar?