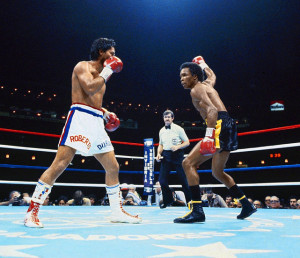 Before there was Floyd “Money” Mayweather and Manny Pacquiao, there was Sugar Ray Leonard and Roberto “Iron Fists” Duran. Throughout the 1980’s, these two dominated the sport of boxing and became legends. They had three mega fights, but the most infamous and talked of their legendary trilogy was the “No Mas” fight in November of 1980.

This fight happened long before most of our time, but remains significantly relevant till this day. Tonight the full story airs on ESPN and will have interviews from both fighters and a few guest appearances to give their recollection, with questions being answered for the first time about the legendary fight. Up until this fight Duran was viewed as the “Irresistible force and immovable object” with the impressive record of 72-1 record (56 knockouts) and held the world lightweight championship for seven years. Leonard was the fresh faced up start Olympic Champion who was nicknamed Sugar. He was clean cut well spoken and loved to smile; pretty much a marketing campaign’s dream. This is a can’t miss film if you’re a fan of boxing, so tonight at 8pm tune in or record it on your DVR and watch.