regg 6 years ago
share
What you’ve known about diss tracks in the past has been rewritten by the new generation. Having conversations with hip hop “purists” will tell you this within 5 minutes. The recent unravellings of this sudden “beef” between Meek Mill and Drake is all the proof you’ll need. If you’re reading this, chances are you’ve heard Meek’s “Wanna Know”; the response to both of Drake’s diss tracks. Needless to say, it left much to be desired.
Quick rundown: Meek Mill was ranting on Twitter and hit fans with the startling allegation that Drake wasn’t penning his own rhymes. Relatively unknown rapper Quentin Miller was named as the guy behind some of Drake’s biggest hits, and Hot 97’s Funk Flex went ahead and played Miller’s “10 Bands” reference track. Drake remained mum for a few days before stepping forward on wax with “Charged Up”; the calm before the supposed storm. Four days go by before Drake steps up again with “Back to Back”; a less subtle diss record that would not only make his opponent take him more seriously, but is also sure to be a club hit. After much taunting from rap fans, Meek finally gave Flex his response record, and unfortunately it was stale.
This is the first heavyweight rap “battle” we’ve witnessed since social media took on a life of it’s own, and everyone is still eating this up. Memes have been created, comedic videos have been edited, and photoshop has been put to good use all for innocent laughs. Could you imagine “Ether” or “Takeover” coming out now that Twitter is around? Instant gratification is needed in this genre today and Drake has cemented himself in a lane that Meek doesn’t appeal to. Drake has hosted the ESPY’s, SNL, and held his own alongside some of rap’s biggest names. But let me play devil’s advocate for a bit. Did Meek’s allegations strike a nerve? This isn’t the first time Drake has been summoned on wax, but he jumped at the opportunity to silence Meek’s claim. Usually, I’d say music is music these days. We aren’t in the studio with these people when they craft their work so we are only left to assume they are the ones behind their hits, especially when you form a connection with their work.
I was sitting in Starbucks having a coffee and jotting down some notes when I glanced out the window and saw an image of Rakim, Nas, Drake and the Notorious B.I.G. planted onto one of NYC’s city cabs. Ironically, It’s part of Sprite’s new “Obey Your Verse” campaign. All four men hailed for their words, their lyrical charisma, and their wit. Their famous lyrics identified with them, written on soda cans dedicated to their talents, but is Drake deserving of such a tribute? 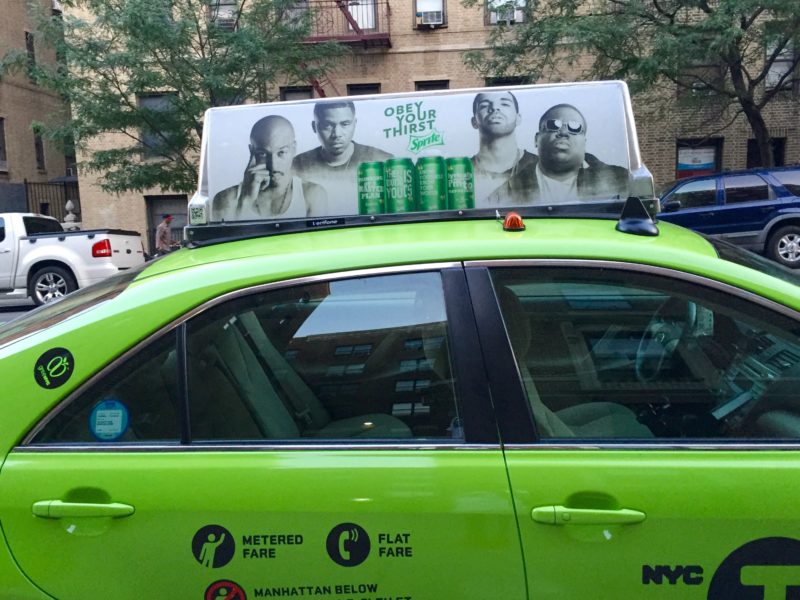 Perhaps Meek was onto something, but he clearly lacks the lyrical depth to tell us. Just two weeks ago, he was the biggest rapper in the world. A number one album and the baddest chick in the game on his arm. Now he’s the most hated guy in rap because his rant was poorly timed and without significant follow up. When I look deeper into it, it seems he was a disappointed fan letting off his disbelief like any one of us would do. There’s plenty of proof of how big of a fan Meek was of Drake in the past. Hypothetically speaking, think about how you’d react if you found out one of your peers wasn’t all they’d been cracked up to be, or praised for. You, too, would probably go on a lengthy rant of your own on the topic of authenticity and such. Only difference is 5 million people don’t follow your tweets, so you’re safe to let off a bit of steam without the world hanging onto every word. For a second, Meek must’ve let all of that out the window. What should’ve been a living room conversation turned into page one news.

Meek’s accusations seemed hateful and misguided, but Drake owes us an explanation. All he’s done in the past few days is distract us from what Meek has been saying with great music. Since Meek’s tweets, Drake has released four new songs. Ultimately it’s the way to win, but when my peers have “that conversation” of the new greats, he can’t be included without clarification on what’s going on. It’s a known fact that Biggie has given others the opportunity to write for him before. Nas has even been accused in the past, so it probably comes with the territory. However, I don’t have reference tracks for either of those artists. Hip Hop is a highly competitive and egotistical genre of music. The Dr. Dre’s, Diddy’s and even Kanye’s of the game have accepted their place as not being top tier lyricists, but as some of the biggest contributors to this genre in more ways than one. If Drake wasn’t plastered all over the city next to Rakim, Biggie, and Nas, or being co-signed by Jay Z and other Hip Hop legends for his pen game, then I’d say we have to move on. As well-executed as his retaliation has been, he still needs to properly address this attack on his craft.
Without a doubt, we need this guy around. The music he’s contributed and the connection he’s made with his fans through song cannot be erased, and the influence he has on the culture is evident. Never has an artist catapulted to fame the way he did without any missteps. A flawless 6 year run is just unheard of. If Meek’s allegations came from a more gifted lyricist, this one would’ve been more interesting. Instead, his call-out is one that comes off as hate since he wasn’t able to challenge it with better showmanship. This fight is fixed! The mere idea of a ghostwriter should be daunting to any rapper. Before Drake releases another amazing song, how about an interview with some insight? School us on how the game works since we’re in too deep on the crafting side, and silence these accusations before proceeding in battle. I’ll keep playing “Know Yourself”, “Used To”, and all the other songs that had “references” because I connected with them. Just do me the solid and shed some light on this.
regg Aug 1, 2015
previous article